Another one from the archives, in 2013 I made my first attempt at foam armour. The Cyberman was a great project for a beginner as it is all incredibly simple shapes. I think the only real mistake I made was not buying good quality thin foam, those areas deteriorated almost instantly. Otherwise the latex paint was very resistant. It was a lot of fun walking around in character all day and interacting with the kids who were so excited to see me (or attack me with their sonic screwdrivers).

Wearing a costume that fully conceals you is a fascinating experience, when people can’t see your face and when you resemble the character well enough, you disappear, all they see is the Cyberman and they are more naturally inclined to play along with the fantasy. I have been looking for an excuse to do full body armour again for years, and I think I might just do that with Isaac from The Orville, perhaps some time next year… If I don’t get distracted by other costumes.

Kroton was an obscure companion for the Eighth Doctor in the comics, a rare Cyberman who retained his humanity. The only thing that made him physically distinct was a black face plate, which I incorporated in this costume. 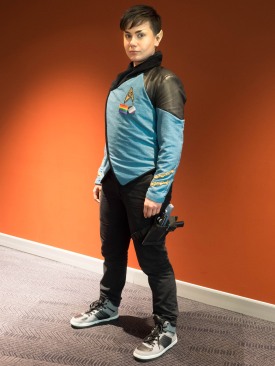 I’ve always had a thing for redesigning Star Trek costumes, I think because the real ones are quite camp but have a lot of iconic elements. So it’s a lot of fun to play with as a designer. The intention with this redesign was to incorporate contemporary streetwear aesthetics. Something practical, versatile but that still feels like a uniform. It was also fun working with a replica of the velour used in the original series. It’s a textile so deeply stuck in the 60’s, it was a wonderful challenge to try to bring it into the 21st or even 23rd century.

I wish I still fit into that jacket, my chest and shoulders are broader now. Although it’s hard to tell because the jacket was designed to create a square silhouette. I can see where I made mistakes, where my tailoring could have been better. But one would hope to have that kind of perspective nearly four years later. I got a lot of compliments at the convention, including from Troy Baker! People genuinely wanted to wear a jacket like this, which is the best compliment of all as a designer, that it works outside the context of a costume. That’s the beauty of “Cosplay Couture” rather than cosplay, one is about accuracy and attention to detail, this other is about creativity and originality. Both can be equally impressive in their own right. But as a costumer, each allows me to express and explore different facets of my skills. 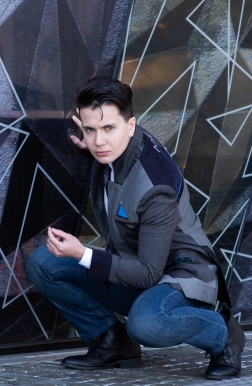 Costume and make-up by Connor Coulson

Photography and editing by Marla Bishop

A little over a year ago Detroit came into my life when things were at their bleakest, my relationship with my family was fractured, I was homeless, staying with a friend, and on top of that I was suffering from debilitating ME/CFS. I was convinced I was going to die soon, I was bed bound, and needed a wheelchair just to get around the house. I basically slept all the time and even watching TV took too much energy on some days. Understandably, I was really bored, so I decided to get back into gaming, I got a PS4 on sale and my brother bought me Detroit and I fell in love with it.

I know, it’s not perfect, but I adore Detroit, it’s a breathtaking world, an ideal world I could escape to. A safe haven. It’s everything I love, sleek cyberpunk aesthetics, androids, a fantastic soundtrack, and a complicated choice based narrative, what more could I want? (Well, a sequel or a DLC for a start!) Connor really resonated with me, there were aspects of his journey I could relate to, and in other ways he is aspirational. It was inevitable that I began imagining how to bring his costume to life, it was structurally fascinating and I would fantasise about how certain details could be constructed. But that’s all it was, a fantasy. I hadn’t been able to sew in months, it was too exhausting. However I am nothing if not tenacious, so whenever I had the slightest amount of strength for it I would research and draw the costume and began sourcing materials.

Normally a project like this would take maybe a couple of months at most, but with ME/CFS it took nearly a year. My health has improved significantly this year thanks to the carnivore diet, so I am glad I was able to work on any creative projects at all. I detail the process of creating the costume here.

This costume and this photoshoot represents a triumph to me, there were times I thought I would have to abandon this project, but I got it complete in time to wear to a comic convention, and I managed to attend the entire weekend and was walking unassisted. The response from fans was great, they admired my work and we shared our love of the game. And getting these photos was not something I could have done a year ago, it involved a fair amount of walking and climbing. It feels great to be cosplaying and modelling again, I’m passionate about them but had to give them up for over a year.

Thanks to Marla for the photos, he is also a Detroit fan so he really understood the character and environment and it was an easy collaboration.

I have been obsessed with Detroit: Become Human since before it was released, as a fan of all things robots I followed the project with interest. And of course Connor immediately became my favourite character (Ruthless!Connor all the way). I have been battling Chronic Fatigue Syndrome on and off for years now and Detroit was released when my health and personal life were at their worst and things only seemed to be on the decline. So this game was one of the few things I could spend my time doing and it was a beautiful world to escape into. But just because I was sick didn’t mean the desire to cosplay died. At the time I didn’t think there was much hope of me ever being able to sit up and sew ever again. But my health has been improving this year and slowly this costume has come together. There will be a separate post for the photo shoot, this post documents my process of construction. END_OF_DOCUMENT_TOKEN_TO_BE_REPLACED